For too long we have been accepting the “digital look” of our photographs. The compression of tones, especially in the dark areas, seems intrinsic to digital photography, but in reality, it is the result of “non-optimum” exposure. With optimum exposure, you do not have to compromise the film-like appearance with digital photography.

It has been more than 15 years since Michael Reichmann wrote about the concept of ETTR (Exposure To The Right) 1 Michael Reichmann. Originally the primary benefit was to separate the signal from the noise of the sensor, especially in earlier digital cameras. With improvements in cameras/sensors technology and digital processing software, the signal- to-noise ratio has improved greatly. However, there are additional benefits when Exposing To The Right – including more tonal data; more sharpness; less processing artifacts. Though the practice of ETTR has generated much discussion and reworking, photographers still labor to “optimize” their digital raw exposure. What follows is my experience at capturing the optimum digital exposure. 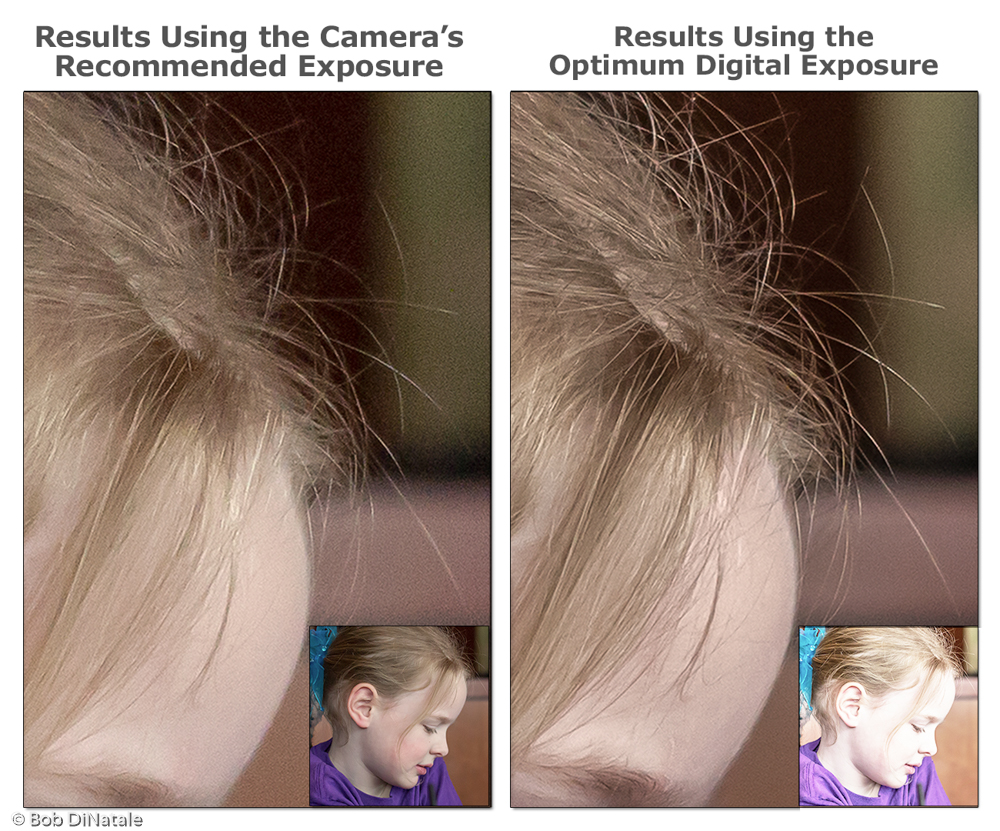 Requirement of ETTR – More Exposure
Exposure To The Right requires more exposure than recommended by our camera’s meter reading – (i.e. a plus Exposure Value or +EV). To do this we need to either open our lens or, even more disconcerting, use slower shutter speeds. These slower shutter speeds could cause camera shake or subject movement. To offset this need for more exposure we can increase our ISO to maintain the desired shutter speed. Again, traditionally one would normally be concerned about the increased noise with higher ISO’s. However, remember that the digital noise is mitigated by using ETTR.
The composite below compares noise at higher ISOs. It shows 3 exposures:
> Section “A” & “B” use the camera’s “metered” exposure at two different ISOs (200 & 800). As expected, we can see the increase in noise using the higher ISO – Section “B”.
> Section “C” on the right is also at 800 ISO but shot at an Exposure Value of +2 then, adjusted in raw software to match the brightness of Section “A” & “B”.
> Compare the noise from the camera’s “metered” exposure at 200 ISO (Section A) with (Section C) which was exposed at EV+2 then adjusted in the software to match the brightness of (Section A).
.     Notice the noise from (Section C), the EV+2 exposure at 800 ISO, is the same or better than (Section A) the metered exposure at 200 ISO! 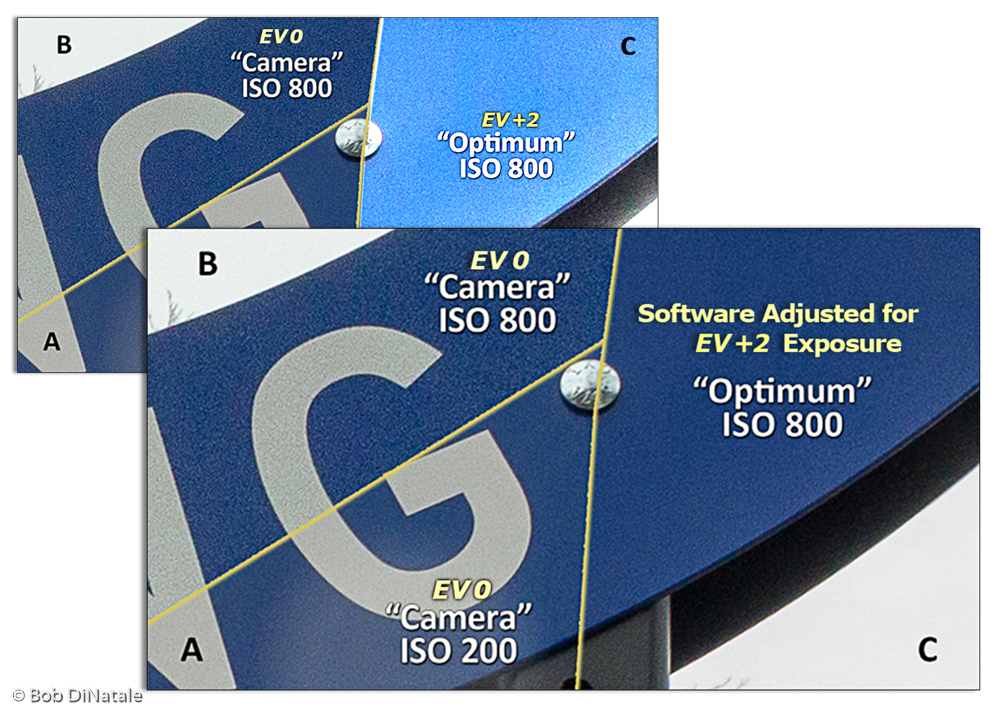 Digital Exposure Facts to Ponder…
This chart shows increasing exposure 4 stops above mid-tone in 1 stop increments. In an “Optimum” exposure:
.      > the top 10% of your capture (from 90-99% software brightness) contains 75% of the data!
.      > the top 3% contains 50% of your captured data!
………….2 George Jardine “What I found was how dramatic the tonal compression truly is…” Revisiting the Zone System” 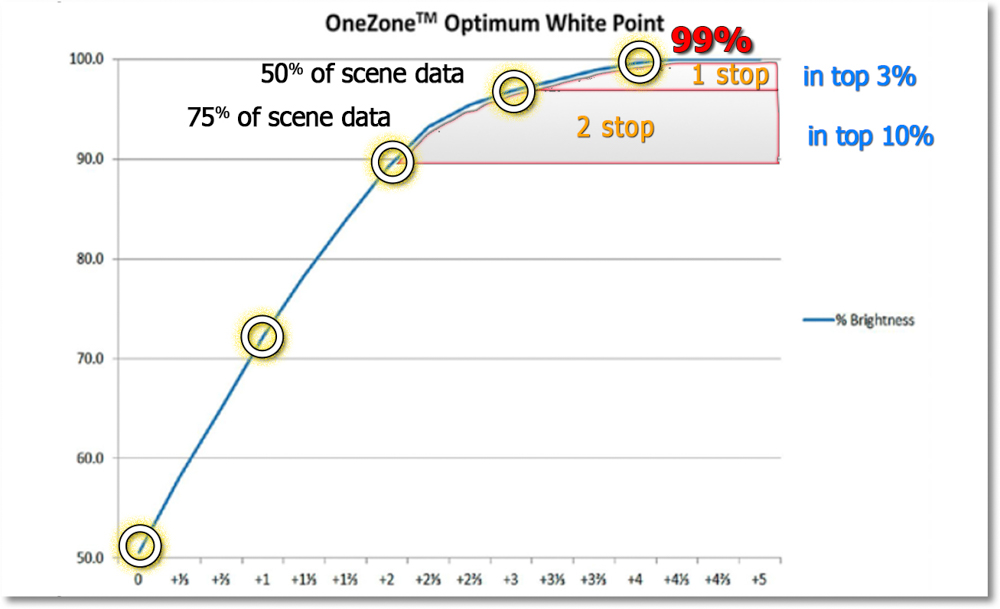 If the brightest part of your scene has a 90% brightness in your software:
…Your scene is underexposed by two stops!
…You captured only 25% of the scene’s data!

The idea that the camera’s “metered” exposure is not the final exposure is not a new concept. With both black and white and color negative films, when we tripped the camera’s shutter, it was obviously not the final exposure. It was just the first step between the negative film and the negative printing paper that produced the positive print. I want you to think of digital exposure in the same way.
“The ‘Camera Exposure’ is just the first step toward the ‘final processed’ exposure.”

The inserts show 3 types of exposure choices the photographer has when making a digital capture. Here, we use of two classic photo examples: a black cat in a coal bin and a white rabbit in a snow.

The Proper exposure would be to adjust the metered exposure: “more-exposure” for the white rabbit; “less- expose” for the black cat. This would place each exposure where the viewer would expect.

“The ‘Optimum’ exposure of the black cat and the white rabbit are similar!”

Here Are a Handful of Digital Exposure Axioms:

Note: When viewed before processing, this “optimum digital exposure” will certainly not seem to be the “Proper” exposure. The “Optimum – Digital Negative” cannot be judged BEFORE it is developed by Raw processing software!

“A good digital exposure looks as if it has been dipped in skim milk!”

“The OPTIMUM Digital Exposure” is the exposure that will place the brightest part of the scene at 99% brightness in your software… the Optimum White Point [OWP].

How do we produce this 99% OWP for an image? We know if we use our metered exposure, the black cat will be mid-tone brightness. However, if we spot-meter the brightest part of the scene – in the case of the black cat, the yellow green of his eye then, “place” that exposure at 99% brightness on the software’s histogram… we would obtain the optimum exposure for that scene.

Similarly, if we meter the brightest part of the white rabbit – his hind leg, then “place” that exposure at 99% brightness on the software’s histogram… we would obtain the optimum exposure for that scene

“The best digital exposure is ‘Not Metered’, ‘Not Proper’… BUT ‘Optimum’ “

I have developed two OneZoneTM methods* for capture an Optimum digital exposure:

To use Method #1 you need to determine and exposure bias for your equipment. Your exposure bias is the number of stops between your spot-metered reading and the exposure that produces 99% brightness in your processing software – the Optimum White Point (OWP).

To do this, meter a white card and make a series of 15 exposures, increasing each by 1/3 stops, a 5-stop range. Once shot, read the brightness of each exposure in your software. Mark the exposure that reads 99% brightness. Note the difference in stops… this is your exposure bias to produce your [OWP]. (my testing was +4.3 EV)

Is The Spot-Meter OneZone Method #1 Practical? Absolutely! It is perfect for scenes, in the studio – static subjects and photographic situations with ample shooting time.

But what about photographing, cats, rabbits, grandkids, events; street scenes – situations with little setup time or subject matter that moves too fast for spot metering.

This is where the OneZone Method #2 is more practical. It may not be as precise as Method #1 but it provides the digital photographer with

a real-world option for optimizing their digital exposures.

OneZone Method #2 consists of taking a set of 3 bracketed exposures.

Another, not-so-apparent benefit of The Optimum Digital Exposure, is that since first introduced there have been many advancements in Camera Raw processing software. Digital processing technology will continuum to improve. If we optimize our digital capture today, there is no telling what detail we will be able to extract from that same Optimum Digital Exposure years from now!

“The Camera RAW capture is the perpetual latent image!”

Bob DiNatale is an Adobe Certified Photoshop Lightroom Expert and an X-rite Coloratti.

He has a US Patent in Color Printing; worked with experimental silver emulsions at Polaroid; taught both the Nikon and Time Life Schools of Photography and founded the Olympus School of Digital Photography.

Bob conducts a free online Forum where he analyzes your photos from capture to processing with consideration for your artistic intent. For more info and to sign up for his free Forum check out his Forum page: www.bobdinatale.com/forum/

…Special: from his site, you can purchase the book with 1 hour online discussion for $100

For more details and examples go to www.OneZone.photos

Bob can be contacted by email email@bobdinatale.com or from his website www.BobDiNatale.com